In the Czech Republic, Macedonian cinema is not well known, but in this small country in the heart of the Balkans, very interesting films are made. Czech viewers can verify the truth of this claim from November 3, when the Balkanfilm distribution company starts showing films “To the Hilt” and “Punk is not dead”. 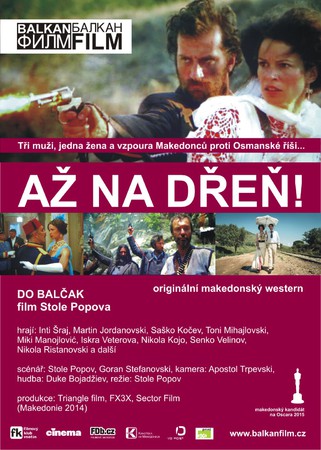 Both films have so far been screened in the Czech Republic at festivals where they received very good ratings. Punk Not Dead won the 2011 East of West Award in Karlovy Varyma, while “To the Hilt” delighted viewers at this year’s Febiofest. The choice of these films for distribution in the Czech Republic is explained by the director of Balkanfilm Milan Kostelník: “From the inexhaustible amount of films produced in the Balkans we want to choose the best ones. Punk is not dead and To the Hilt They were a clear choice for us. The festivals have only solidified our intention. “

“To the hilt” was shot by director Stole Popov, one of the most significant directors of the former Yugoslavia, after a seventeen-year break. The name alone may not be a guarantee of quality, but the movie Do Balchak! Popov confirmed that he belonged to the Balkan Cinema Gold Fund as much as with his earlier works Tattooing , Happy New 49 or Gypsy Magic . The film catches the attention of an unusually rich set and convincing acting performances. It connects the seemingly irreconcilable – Macedonian struggle for liberation from Turkish rule from the early 20th century and a non-traditional love story, all presented in an attractive, western style. Popov approached the serious historical topic with surprising ease and managed to make a very entertaining movie.

Why Balkanfilm decided to offer Czech cinemas a 5-year-old Punk film is not dead explains Balkanfilm playwright Jiří Fiala: “I think it’s never too late for a good movie. After all, next year we want to introduce some older Balkan films that we think deserve it.” He says of the film: “He talks about punk as a life attitude, about interethnic intolerance, about life in post-Yugoslav countries, about friendship, about how the West does not understand the Balkans … Despite all these serious topics, the film is still humorous to the viewers close…”

Balkanfilm distributes in addition to the aforementioned two Macedonian films and the Czech-Macedonian drama Honeymoon . From these three films, it is possible to make a small presentation of a Macedonian film called “Macedonian Oscar nominees”.