From the special issue of Time magazine 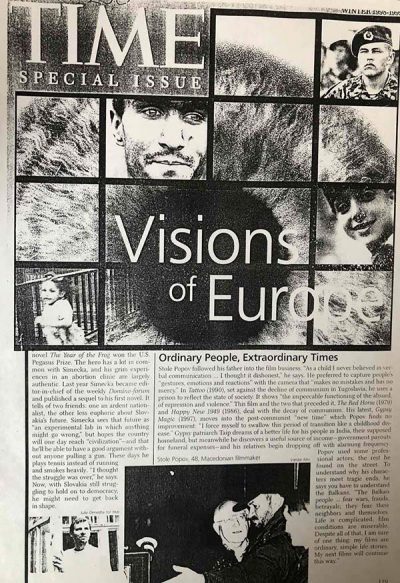 Stole Popov followed Ins father into the film business. “As il child I never believed much in verbal communication … I thought it dishonest” he says. He preferred to capture people’s “gestures, emotions and reactions” with the camera that “makes no mistakes and has no mercy.” In Tattoo (1990), set against the decline of communism in Yugoslavia he uses a prison to reflect the state of society. It shows “the impeccable functioning of the absurd of repression and violence.” This film and the two that preceded it, The Red Horse (1979) and Happy New 1949 (1986), deal with the decay of communism. His latest Gypsy Magic (1997) moves into the post-communist “new time which Popov find no improvement: “I force myself to swallow this period of transition like a childhood disease” Gypsy patriarch Taip dreams of a better life for his people in India, their supposed homeland, but meanwhile he discovers a useful source of income – government payment for funeral expenses – and his relatives begin dropping of with alarming frequency.

Popov used some professional actors, the lest he found on the street. To understand why his characters meet tragic ends, he says you have to understand the Balkans. The Balkan people …fear wars, frauds, betrayals; they fear their neighbors and themselves. Life is complicated, film conditions are miserable. Despite all of that I am sure of one thing: my films are ordinary, simple life stories. My next films will continue this way.