The undisputed international success, which this film enjoyed very soon, proved that with the insistence on such a production, despite its increasingly evident discontinuity, the Macedonian feature film could find itself in the most current trends in world cinematography.

The text used as the basis of the film was written by Mirko Kovac; its final structure was designed by the director Stole Popov and the Belgrade cinematographer Zhivoin Pavlovic.
The director Stole Popov in this way slightly departs from the suggested pre-text of the screenplay and endeavors to make a specific visual structure where this absurdity will find its place of expression. In the realm of “Tattoo” the existential problems and issues confront the problems of man’s faith, which does not necessarily have to be a religious act, and all of these lead the protagonist to an ethical confrontation with himself and also the others.

His approach is at times strictly realistic and at others has naturalistic layers but all of these elements simply facilitate the release of true dramatic energy that this film undoubtedly possesses in great quantity. The entire artistic ensemble in charge of the setting and the acting is maximally involved with the atmosphere in the prison. Here we highlight the brilliant performance by Meto Jovanovski who remains a pillar of strength for this ensemble throughout the film. The cast also includes Kiril Pop-Hristov, Dancho Chevrevski, Svetozar Cvetkovic, Slave Jolevski, Stevo Spasovski, Blagoja Chorevski, Stole Arangjelovic, Petar Arsovski, Jovica Mihajlovski, Liljana Megjesi, Zaim Muzaferija, Kiril Ristovski, Mladen Krstevski, Aleksandar Chaminski, Shishman Angelovski, Vancho Petrushevski, etc.
The cameraman Misho Samoilovski manages to achieve optimal functionality in every shot, which can also be said for the set design of the decorator Nikola Lazarevski

“In TATTOO, set against the decline of communism in Yugoslavia, he uses a prison to reflect the state of society. It shows “the impeccable” functioning of the absurd of repression and violence.”

“Popov leads this brutal story of social repression, evil and sadism among people with his well known style. At the same time, he establishes himself as a superb master of conflict and violence… Stole Popov has firmly established himself as one of the leading film authors in the Balkans region.”

“It’s simply amazing how Macedonian film meets the challenges of time, radical changes in the life of his country and its people, with a such naturalness and willingness, so firmly and irrevocably, drifting and uncompromising.
Glow of hatred and despair, easy stabs simple story of TATTOO, which for the Macedonian film proved to be equally important and essential.”

“And later, when TATTOO was honored by an independent jury with a Nomination of the European Film of the Year, the Greek government demanded its withdrawal from award consideration through a member of the European Film Academy – but the Academy stood firm, and the film remained in the running without the border of accenting a national identity. Result: Macedonian cinema was now known world-wide!”

The apocalyptic fall in TATTOO by Stole Popov.
The atmosphere of destruction is dramatically, apocalyptically and cinemasтically very effectively shown in TATTOO… A performance worthy of an Oscar was given by Meto Jovanovski who portrayed Ilko… 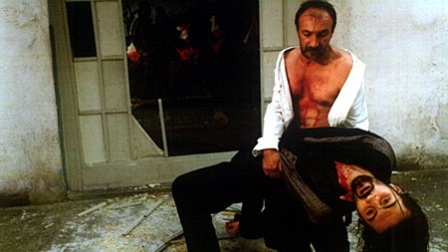 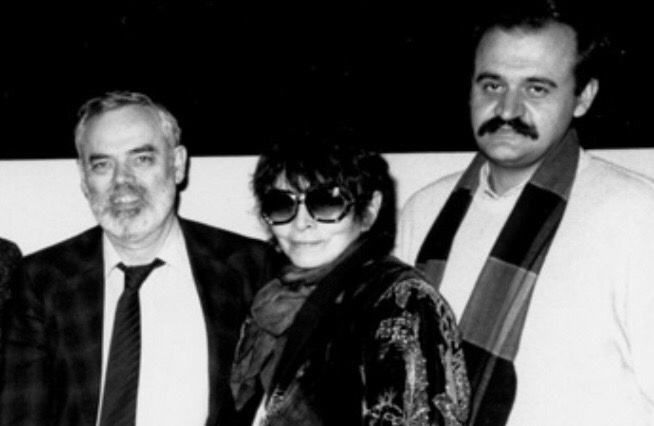 Ron HOLLOWAY (1933-2009) was an American critic, film historian, filmmaker and correspondent who adopted Europe as his home in the early fifties and spent much of his life in Berlin. He was an expert on the study of German cinema and against all odds produced, with his wife Dorothea, the journal German Film, keeping us up-to-date with the work of directors, producers and writers and the showing of German films around the world. 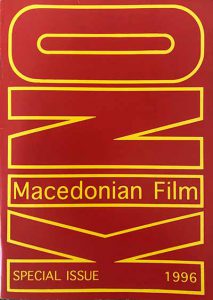 In 2007, Ron Holloway and his wife were awarded the Berlinale Camera Award. Ron also received the Bundesverdienstkreuz (German Cross of Merit), Polish Rings, Cannes Gold Medaille, the American Cinema Foundation Award, the Diploma for Support of Russian Cinema and an honorary award from the German Film Critics’ Association.

Ron was also a valued contributor to Kinema for the past fifteen years.

“Just as dramatic a controversy on the 1991 international festival scene was Stole Popov’s Tattoo, the first feature film to bear the banner of the newly constituted stale of Macedonia. The story of a cantankerous yet sympathetic individual who gets jailed for absurd reasons and then dies a victim of police brutality, Tattoo featured another outstanding acting performance by Meto Jovanovski as the “loser” Ilija and was the kind of timely sociocritical film document that does credit to a democratic society. Yet when the film was invited to the Montreal film festival, its presence as an official entry from the Republic of Macedonia provoked a protest by the city’s Greek community without anyone having even seen the film. And later, when Tattoo was honored by an independent jury with a Nomination for Furopean Film of the Year, the Greek government demanded its withdrawal from award consideration through a member of the European Film Academy – but the Academy stood firm, and the film remained in the running without the bother of accenting a national identity. Result: Macedonian cinema was now known world-wide!” 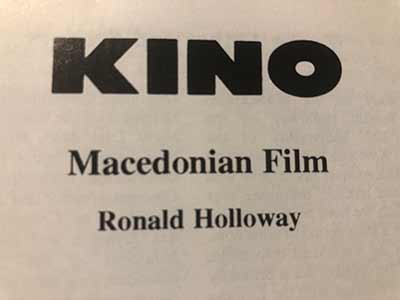 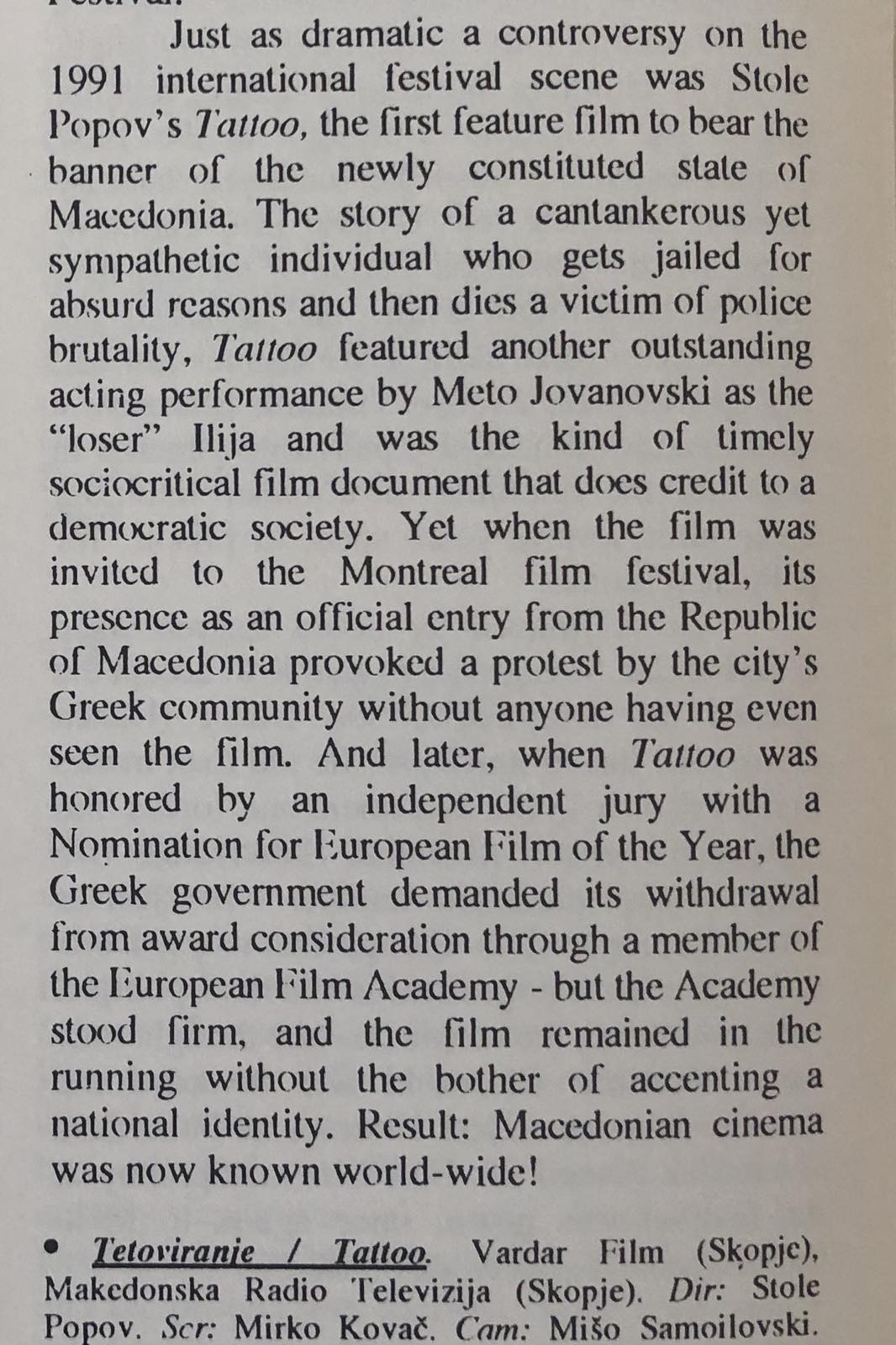 In 1992, "Tattooing" was officially nominated by the Yugoslav jury for the Oscar nomination for Yugoslavia, but in October the Republic of Macedonia declared independence and, at Mr Popov's request, the candidacy was changed to Macedonian. The American Film Academy did not accept the candidacy because R. Macedonia was not a member of the United Nations.