The Magic of Maestro

In the unforgettable 1960s, 1970s and 1980s, in the art of the ex-Yu countries, people dreamed of and created something that falls under the terms freedom of thought, democracy… Remarkable works in all areas of creation were produced. New authors, new sensibility, revolutionary ideas… However, there was also a counterpoint – political one, of course! Others, on the other hand, dreamed of wars, genocides, bloodshed… The wounds stayed. But the works of art as silent witnesses of the following insane and absurd decade, the 1990s, remained, too.
Recently I saw again the video of Leb I Sol for their song dedicated to Skopje. Timeless music! I guess its visual imprint could have been a tedious panoramic reflection of the city on the Vardar. However, the visual counterpart of that timeless music has also become a timeless creation! A rounded-off artistic ellipse! The soul of the city, the soul of its people, the rhythm of everyday life, trust, hope, love – all of it poured into four minutes. It takes a master to create a portrait of a city in that space of time and music. And it was no coincidence that in 1987 the video won the best music video award at the JRT Belgrade Festival. And in it, in a fraction of a second, there appears the author himself, Stole Popov (who, in fact, in a genuine Hitchcock style, shows up in all his films for one brief moment).

n the 1970s, the Macedonian film production receives a new impetus with the emergence of a new generation of filmmakers. Their objective was making sure that the already established traditional values of the Macedonian film grew further, enriched with a new esthetic meaning, rather than remain achievements of the past. Stole Popov is one of them.

Some of Stole Popov’s Best Work Is Featured Below. 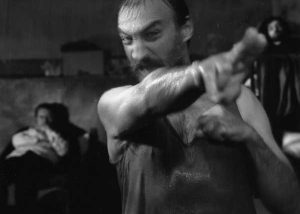 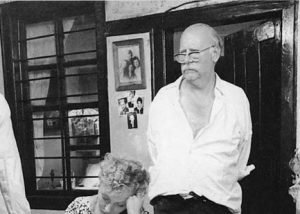 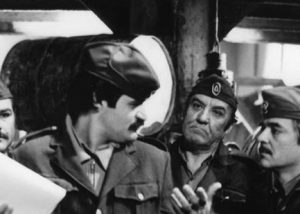 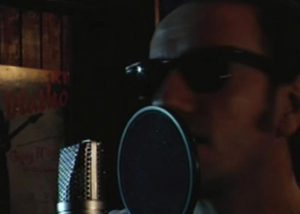 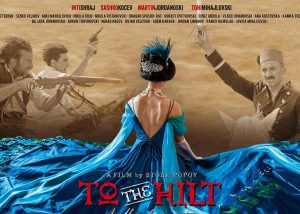 To the Hilt Gallery 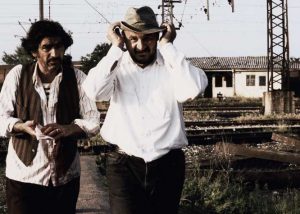 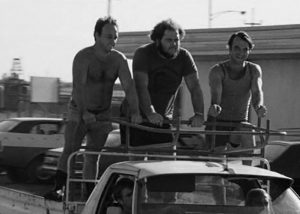 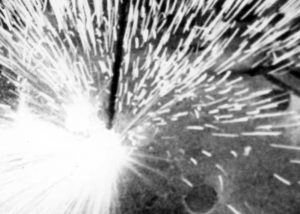 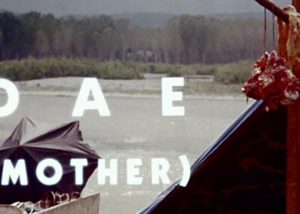 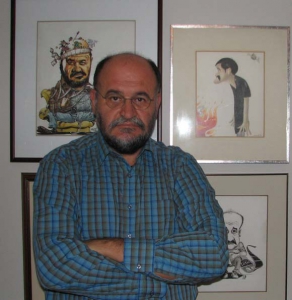 Stole Popov began his walk down the arduous path of film making with documentaries. Great ones, by the way! Including the ordered documentary ALKALOID (1974), probably one of the most successful films of its kind in former Yugoslavia, as, in fact, confirmed by the numerous awards the film won. That same year (1974) Popov also made the documentary FIRE, an unusual poem of labor and of the anonymous Promethean love, artistically exceptional, encompassing the best experiences of the classical creative documentary. The epic full-length documentary AUSTRALIA, AUSTRALIA appeared in 1976 and confirmed Popov’s stunning talent, showing him grow in this film into an analyst and a story-teller about the world of our migrants to Australia. The tone of pessimism in this dramatic mosaic of bizarre portraits and melancholic fates frequently echoes as a grotesque and a joke, which is balanced later into not even a slightly optimistic vision dominated by the theme of death. The diversity of thematic and moral preoccupations in Stole Popov’s documentaries united by the consistency of his style is reflected also in the balladic documentary about the vagrant life of the Roma people, DAE (1979), a triumph that brought him just a step away from the Oscar and marked his path toward his feature film success. In this film, stress is laid on the metaphoric quest for the connection between man and his land and it is here that we discover the freedom of expression that as a lightning unveils Popov’s outstanding creative powers.

The feature film THE RED HORSE (1981) is Stole Popov’s debut in its feature film production (it is a fact) but it is by no means a “beginner’s” work bearing mind its indisputable dramatic and visual qualities. In short, THE RED HORSE represents a compendium of esthetic virtues, until then only partially achieved in our feature film. It is worth saying that with this film Popov builds on a beautiful and confirmed tradition of the Macedonian feature film production and that is its connection to the contemporary Macedonian literary production. The film was made based on the eponymous novel by the famous author Tasko Georgievski, which follows the destiny of the exiled members of the Democratic Army of Greece (DSE). Typical for this film is the convincing visual reconstruction of the time and conditions through which the main hero (Boris Tusev) goes through together with his fellow fighters. However, I wish to emphasize that the polemic tone reverberating throughout the film is simply a consequence of the endeavor to not just materialize visually Boris Tusev’s drama but to also present to the audience its underlying causes, moreover in a form in which they objectively appeared. Setting the action in a historic context results in an identical dramaturgical treatment of both the historical and the individual. And it is here that the director’s exceptional talent is recognized most – with unseen ease Popov moves through time and space, using a wealth of expressive film devices, frequently permeating the realism with surreal scenes. 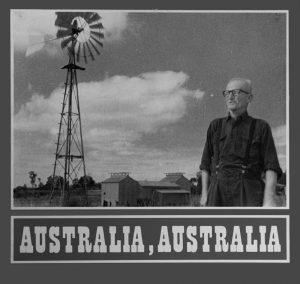 It is commonplace for the audience to cannot wait for the sophomore film of a director whose debut proved a remarkable success. The second release represents a test to the author – it shows whether the first success was incidental or has ushered in an author able to steadily build his career solely along an upward path. The latter happened in Stole Popov’s case!I can say with full responsibility that the film HAPPY NEW YEAR -1949 (1986) was the best Yugoslav film of the current production year, as, in fact, confirmed by the garnered awards. Relying on the play by Goran Mihic (Mihic and Popov wrote the screenplay), Stole Popov with this film gave confirmation to his own profound creative interest in a visual treatment of human fates stranded by the historic events of this region and so it appears that it is here that the author provides also the answer to the question asked in his previous film (THE RED HORSE). The answer is that ideological repression does not recognize borders or human feelings and desires. However, truthful to his author’s credo, in HAPPY NEW YEAR – 1949, too, Popov raises certain other questions, primarily of purely ethical nature – whether man in the historic context falls prey to his involvement in the historic events or to his effort to understand them. Here, too, the author touches the realms of the absurd, of the metaphysical – the various historical mechanisms with their, often, concealed processes. With this he announces his next film of the absurd, TATTOO. The director’s procedure in HAPPY NEW YEAR – 1949 is one of the ultimate esthetic qualities where remarkable harmony is established among all expressive segments in their connection with one another and perfect functional cooperation. There are two more important segments that I wish to stress. The first is the pervasion of a difficult subject with nonchalant humor whereby many stereotypes are shattered, a procedure that our filmmakers avoided until then. And the second is that the film sets up maximum communication with the audience introducing them step by step into its, frequently, enigmatic space. Popov, in fact, with his delicate style, throughout the film keeps that necessary distance that simply hypnotizes the consumer. 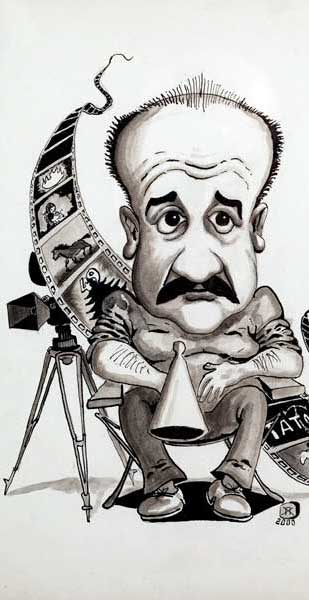 Stole Popov’s third film, TATTOO (1991), appeared in a time when the absurd bloodshed in the disintegrated federation claimed thousands of lives. In a very original way, this film addresses a universal subject that has not always been pliant to cinematographic treatment given that the theme of the absurd usually escapes the patterns of any dramaturgical confinement. This film (whose script was written by Popov, Mirko Kovac and Zivojin Pavlovic), although not as much awarded as Popov’s previous film, became a cult film whose characters’ lines frequently resurface in the communication of ordinary people (in fact, the same happened with HAPPY NEW YEAR – 1949, too). As regards this film, I have to express a certain amount of critic’s pleasure considering that Stole Popov discretely puts the script a little on the side and creates a special visual structure where even the absurd finds room to express itself. It seems that the director’s conception insists on an overall disturbance, a reality shift from what we visually perceive. The film is, in fact, a nightmarish situation in which all protagonists are involved. That mechanism of the absurd is consistently implemented throughout the film, starting from the lead character’s home, to his arrest, to the situation in the police van (where we discover a specific type of humor), to the sequences at the remand prison, to the rituals at the prison where a man’s life is a big mystery, to the main hero’s absurd death. The threatening atmosphere of the space and situations take the absurd to unbearable frontiers. Practically, all that happens has the nature of a totally deformed humanistic perspective in which one of the inmates (Jesus) commits suicide, choosing death as a way out of the living hell. Anticipating the directors’ dramaturgical stances, the audience, too, while watching the film, often feels as a hostage, as the phobia takes hold of them, too, with considerable intensity. That is basically a result of the good directing procedures. Moreover, this film, by expanding the initial idea’s framework, not only esthetically but also cognitively, remains as a valuable sociological and esthetic testimony of the man in the whirlwind of absurd situations.

In 1997, the film GYPSY MAGIC was released (based on Vladimir Blazevski’s screenplay), with which an attempt was made to show the real situation of the Roma people whose material misery stands opposite their psychological freedom, which is their true fortune. The nomadic mentality, the manifestation of the primordial human need to search, the love of life and the nostalgic thirst for life constitute the essential poetic idea of this film, in which Stole Popov dexterously shuns the trap of making a film with exotic labels. On the contrary, the director shows no sign of being drawn to the exotic appeal. He rather leans toward a paradoxical vitality, in which he mixes the odd colors and movement with the just as odd fierceness and brutality. I believe that here Popov employed with success the principle of a wonderful balance of space, which creates an opportunity to identify the true dimensions of the Roma endurance. There are no experiments in the way the director expresses himself, as the sequences emanate only understanding and, if you wish, love of a deprived world. I say “sequences” considering that the multiple layers we discover in them reflect simultaneously social, ethnic, ethic and, of course, personal views with universal meaning.

Author of the text : Ilindenka Petruseva