The primary impression is that this movie makes an effort to picture the real position of the Romanies, with whom material poverty is opposed to psychological freedom, which is supposed to be the real wealth. Based on this model, the director attempts to raise the content of the movie to a universal level. The nomad mentality, the appearance of the age-old human need to search, and the nostalgic thirst for life, are supposed to be the essential poetic message of this film.
In this movie the color has a dominant psychological character, since color too, has its value in their everyday life, which is marvelously and above all functionally noticed and recorded by the cameraman of this movie – Apostol Trpevski.

The central character is a trader and collector of second hand brick-a-brac, Taip, played by Miki Manojlovic. Opposite to him is his wife Remzija played by Katina Ivanova. They both realize their role trough splendid and impressive actors’ methodology. Since it is clear from the beginning that Taip’s desire to take his family to India is an imaginary ardor, and as such it is an unrealistic dream.
It is there that, with its visual warmth and dramatic strength, the movie touches us with its sensitivity and indisputable reality. As a contribution to this feeling we add the unusually functional music background of Vlatko Stefanovski. We must also stress the successful cooperation in the visual build up of the movie with the editor Dimitar Grbevski and of course the crew of actors composed of professionals and “naturals.” In addition to the already mentioned belong Toni Mihajlovski, Anton Zeki, Dancho Chevreski etc.
This movie definitely places the director, Stole Popov among the best representatives of Macedonian cinematography

Everyone who liked TIME OF THE GYPSIES by Emir Kusturica, and Ettore Scola’s UGLY, DIRTY AND BAD will appreciate Stole Popov’s GIPSY MAGIC. This is another extremely entertaining and touching story about some people living in the slum…
The audience finds great pleasure in the happiness and crazy humour among these people…

Gypsies in struggle for life, over the Balkan volcano… Miki Manojlovic, true explosion on the screen! It is impossible to untangle the vivid and unbelievable knot of plots, gestures, devastations, festivity, struggles and forgiveness that happen… For quite a long time we haven’t seen similar image on the screen, about the tough life which indeed is metaphor of the Balkan! Little Macedonia, huge slap!

GIPSY MAGIC from Macedonia, is bittersweet tragicomedy with absurd moments of gypsies’ lives, caught in the middle of messy Balkan. Popov in his film has packed everything so well: love and death, violence and poverty, fraud and friendship, dreams and hope, without any sentimentality and modern mumbling.

Stole Popov is a great artist for me. A man with cosmopolitan view on the world and life, with enormous experience, who understands the film technology…

In Miki Manojlovic’s performance (a good bet for best actor), Taip is a force of nature whose gargantuan energy is divided equally between violence and fantasy…

Set against the drinking and brawling and crying and scamming of gypsy life, Popov’s latest movie, GIPSY MAGIC pulls movie goers along a roller coaster of brutality and beauty as it explores the tenuous ties between life and death.

Kusturica’s Time of the Gypsies in some ways concludcs the history of united Yugoslav cinema. In the times that followed, during the conficts in Croatia and Bosnia, post-Yugoslav cinemas became more or less preoccupied with their own survival. Thus, the image of the Roma disappeared from the screen. However, Roma invisibility on the cinema screen in the Western Balkans did not last for long. Soon after an uneasy peace was established in Croatia and Bosnia at the end of 1995, Post -Yugoslav cinema launched two award-winning all-Roma features.
The first, Gypsy Magic (Popov 1997), came from Macedonia. Kusturica made Crna Macka, Beli Macor/Black Cat, White Cat (1998) in Serbia. Black Cat, White Cat had its world premiere at the Venice Film Festival where Kusturica won the best director award. One year earlier, in 1997, Gypsy Magic had premiered at the Montreal World Film Festival. The film was a nominee for the Grand Prix des Ameriques. If Gypsy Magic just missed there, it was luckier a couple months later, during the Mediterranean Film Festival in Montpellier, where it won the Grand Prix Antigone D’Oro for Best Film. It seemed that the focus on the Roma was back in full swing. Both the European festival circles and filmmakers from the former Yugoslavia keep watching and making filmic narratives about Romani living in the Western Balkans. 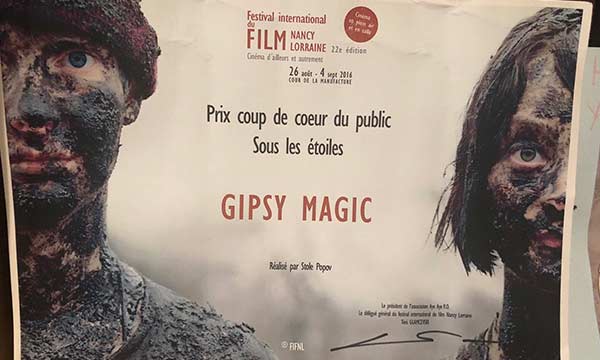